This page includes resources about the Eve Case and links to organizations working to advance the rights of people with intellectual disabilities.
For more information about this issue, please contact:
Dr. Tim Stainton
Director, Centre for Inclusion and Citizenship
Professor, School of Social Work
University of British Columbia
tim.stainton@ubc.ca

What was the case about?

In The Eve Decision, the Supreme Court of Canada ruled that people cannot be sterilized without their consent, unless there is a good medical reason for this to happen. The case went to the supreme court because a mother wanted to have her 24 year old daughter, who had an intellectual disability, sterilized. The mother wanted to have her daughter sterilized because the mother was afraid her daughter would get pregnant.  The mother did not think her daughter would be able to look after a child. The daughter’s name was never made public and the court called her Eve.  This is why it is called The Eve Decision.

People First of Canada is the national voice for people who have been labeled with an intellectual disability. We are about rights – human rights, citizenship rights, accommodations rights and language rights. The right to freedom, choice and equality for all.

People First of Canada described the case this way:

The Eve case was about a young woman with an intellectual disability whose mother wanted to have her sterilized.  The sterilization was not about Eve’s health, but to avoid any unwanted pregnancy. People First, along with other groups, thought that it was Eve’s right to decide her own health care, not her mother’s. The case went to provincial court and ultimately to the Supreme Court of Canada. Although the case took many years, Eve eventually won the right to make her own decisions and was not forced to undergo sterilization. People First of Canada Legal and Political Issues
People First of Canada reported on this case in their document called “People First:  The History and the Dream” in this story called “It’s My Body”

Barb Goode, Harold Barnes and Peter Park were national leaders in the People First movement in the early 1980s.  They heard about the case of a woman known as “Eve”.  That was not her real name.  Eve’s mother saw her holding hands with a young man from school.  She worried that Eve might get pregnant.  Eve’s mother decided that Eve should be sterilized.

People First leaders spoke up.  They got the Canadian Association for Community Living to support them to represent their views to the Supreme Court.  The Canadian Association supported the formation of the Eve Committee – Barb Goode, Peter Park, Harold Barnes and David Lincoln.  They started working in June of 1981.  With the help of their lawyers, they prepared their case.  In 1985, the case went to court.  It took a year for the court to decide.

Barb Goode describes the victory and its importance:

It was the first time ever that people with mental handicaps have taken a case to the highest court in Canada.  It took a long time to get there – seven years we were waiting.  I am very glad we had a long time to understand the case really well.

Before people were just given the operation.  We were not always given the choice. It is now against the law to be sterilized without you saying whether you want it or not.  But some parents want to have control over their son’s or daughter’s lives . . . The nine judges agreed with us that Eve should not be sterilized without her saying her own decision or choice.

The “Eve” case was very important to the People First movement in Canada.  It proved that self advocates could take their issues to the highest court in the land, and win.   People First leaders learned how to use the courts and work with lawyers to fight for their rights.

The “Eve” case, in some ways, was only the tip of the iceberg. Harold Barnes went on to be a leader in the fight of people in Alberta who were sterilized against their will in Michener Centre.

“The Canadian Association for Community Living is a family-based association assisting people with intellectual disabilities and their families to lead the way in advancing inclusion in their own lives and in their communities.  We do this in Canada and around the world by sharing information, fostering leadership for inclusion, engaging community leaders and policy makers, seeding innovation and supporting research.  We are dedicated to attaining full participation in community life, ending exclusion and discrimination on the basis of intellectual disability, promoting respect for diversity and advancing human rights to ensure equality for all Canadians.”  As endorsed by CACL Board March 28, 2012

Inclusion BC is a provincial non-profit organization dedicated to promoting the participation of people with developmental disabilities in all aspects of community life. We provide support, education and advocacy where and when it’s needed, breaking down barriers and building communities that include people of all abilities.

The policy statement talks about the Eve Case and another case from 1997 where a mother in British Columbia had her 14 year old son sterilized by castration.

The importance of the Eve Case has been discussed in several books including:

Drawing extensively on personal experiences, this important volume looks at sexuality and relationships in the lives of people with intellectual disabilities, painting a genuine picture of the range of sexualities and relationships people want. Honest and reflective, it shows how sexuality has been managed and controlled in different countries. It explores a range of issues such as rights, resilience, protection, sexual oppression and the lack of privacy for those living in care institutions. Co-edited and with contributions by people with intellectual disabilities and allies, this unique book offers an authentic account of the challenges people face and what society needs to do to respect people’s rights. Providing insight into a morally, ethically and legally complex area, this book will be essential reading for people with intellectual disabilities, their advocates, families and supporters; social care managers, social workers, and other professionals working in the field as well as academic researchers and students.   Read an excerpt from this book here

Group Politics and Social Movements in Canada, Second Edition updates and expands its exploration of a wide range of organized group and social movement activity in Canadian politics. Particularly distinctive is the inclusion of Quebec nationalism and Aboriginal politics. Many other areas of collective activity are also included: the Occupy movement and anti-poverty organizing, ethnocultural political mobilization, disability, lesbian and gay politics, feminism, farmers and organized interests in agriculture, Christian evangelical groups, environment, and health movements. Contributors to the collection employ a number of theoretical perspectives from political science and sociology to describe the evolution of organized groups and movements and to evaluate successes in exercising influence on Canadian politics. Each chapter provides an overview of the group or movement along with an account of its main networks and organizations, strategies, goals, successes, and failures. Read an excerpt from this book here

This book examines how and why mothers with disabled children became activists. Leading campaigns to close institutions and secure human rights, these women learned to mother as activists, struggling in their homes and communities against the debilitating and demoralizing effects of exclusion. Activist mothers recognized the importance of becoming advocates for change beyond their own families and contributed to building an organization to place their issues on a more public scale. In highlighting this under-examined movement, this book contributes to the scholarship on Disability Studies, Women’s Students, Sociology, and Social Movement Studies. Read an excerpt from this book here

Making Rights a Reality? explores the way in which disability activists in the United Kingdom and Canada have transformed their aspirations into legal claims in their quest for equality. It unpacks shifting conceptualizations of the political identity of disability and the role of a rights discourse in these dynamics. In doing so, it delves into the diffusion of disability rights among grassroots organizations and the traditional disability charities. The book draws on a wealth of primary sources including court records and campaign documents and encompassing interviews with more than sixty activists and legal experts. While showing that the disability rights movement has had a significant impact on equality jurisprudence in two countries, the book also demonstrates that the act of mobilizing rights can have consequences, both intended and unintended, for social movements themselves. Read an excerpt from this book here

The Goode Life: Memoirs of 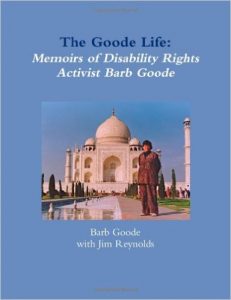 The inspiring story of one of Canada’s most remarkable and humble citizens who, in her mission of supporting equality and giving voice to those who had no voice, traveled much of the globe and met some of the greatest leaders of our age and some of the most vulnerable of citizens.   Barb Goode is a self-advocate leader who has done amazing things in her life and this is her story.   There could be no better representative for Spectrum Press’s first work by a self-advocate than Barb, who has so positively and continuously worked to grow and cement her network, and demonstrated what she might do, against the odds.   Barb prepared for writing this work by taking a number of writing classes, and has been clear throughout the process about the need to use plain language and that her voice be honoured.   Supporting her has taught us a great deal.   We’ve extremely proud to be part of her goal to write this book.

“She sums up her career as, ‘Doing things people didn’t think I could.’   [She is] one of the foremost builders of the modern day disability movement.   A hero who deserves to be included in the same breath as Terry Fox and Rick Hansen.”   Al Etmanski, author of Safe and Secure: Six Steps to Creating a Good Life for People with Disabilities.